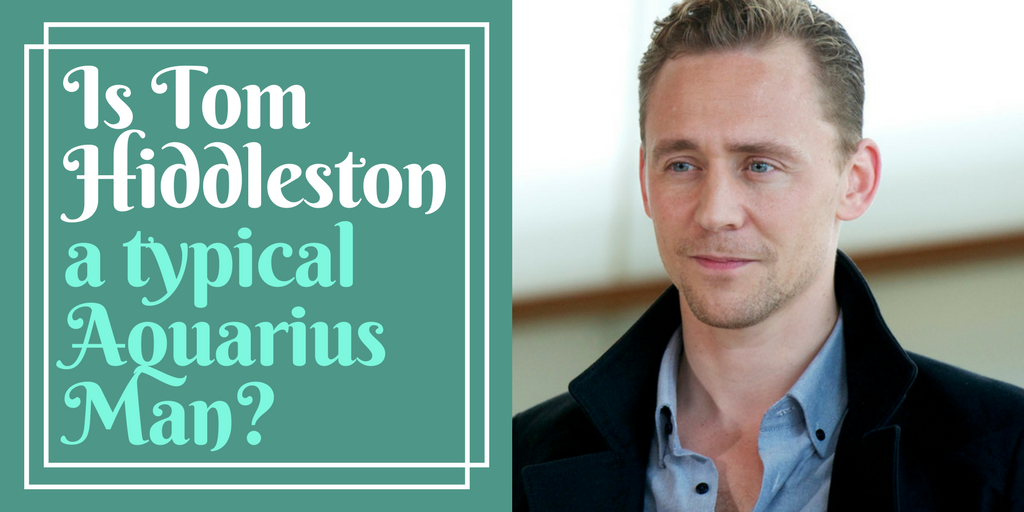 Born on February 9 1981, Tom Hiddleston was born toward the end of the Aquarius range but not close enough to the beginning of the Pisces range to be considered a cusp personality. So, just how much of an Aquarius man is he?

Does he ever! In fact, we’d go so far as to say Tom Hiddleston represents one of the purest incarnations of the Aquarius man to be found on the big screen. Or, quite possibly, anywhere!

The Aquarius man typically has fine, almost delicate facial features, which, when combined with dreamy eyes, creates an almost ethereal appearance. Sound like anyone we know? Tall, long-limbed, slim put solid, Tom Hiddleston is also the absolute epitome of the Aquarius-man physique.

And as if further proof were needed, in 2016, Tom was nominated for the UK ‘Rear of the Year’ award.

Does Tom Hiddleston have the ethics of the Aquarius Man?

The Aquarius man is one of the most ethical of all the signs of the zodiac, the sun sign most likely to be seen elbow-deep in charitable work. And, on this front, Tom doesn’t disappoint.

Tom Hiddleston was one of a group of celebrities, including Benedict Cumberbatch, to design and sign his own card for the UK-based charity the Thomas Coram Foundation for Children, with the cards being auctioned off on eBay. Tom is also a UK ambassador of the humanitarian and developmental assistance fund group UNICEF. In 2013, he travelled to Guinea to help women and children and raise awareness about hunger and malnutrition.

So, when it comes to Aquarian ethics, Tom Hiddleston is not found wanting.

Does Tom Hiddleston Enjoy the social life of the typical Aquarius Man?

This is where Tom and the archetypal Aquarius man part company. Although we’ve all seen him at premieres and Hollywood studio soirées, these are more in the way of a professional commitment or even a contractual obligation.

According to the man himself, after he’s wrapped-up a movie or TV show, he likes to go home, catch up on his reading and simple “potter about”.

The idea of going home and pottering about when there are so many interesting things to do and fascinating people to meet would normally be anathema to the Aquarius man. However, in the case of Tom Hiddleston, when so much of your life is spent in the public eye, meeting and greeting, pressing the flesh, it’s quite understandable that a certain amount of social fatigue can set in.

Does Tom Hiddleston display the creativity associated with the Aquarius man?

You really don’t need us to answer this one, do you? From his Laurence Olivier award-winning Cymbeline in 2008 to his Golden Globe Award for Best Actor in 2017 for The Night Manager, Tom Hiddleston is a true acting heavyweight, an authentic thespian. The creativity needed to not only play but inhabit roles as diverse and demanding as Othello, Coriolanus and F. Scott Fitzgerald is, to say the least, considerable.

The Aquarius man values freedom above all else. How does Tom Hiddleston score on this front?

Freedom is a relative term. One man’s freedom is another man’s prison. And when you’re as famous as Tom Hiddleston, freedom, like privacy, becomes something that’s harder and harder to come by. But Tom’s sense of his own personal freedom truly shines through in his choice of acting roles.

After his big break in Thor, he could very easily have allowed himself to be corralled into more and more big studio pictures, all action and special effects. Instead, he has performed the delicate balancing act that many actors aspire to but rarely achieve. He clearly enjoys these large-scale action extravaganzas (it’s unlikely he could force himself into an acting commitment which offered him no creative reward) but he also sees them as giving him the independence to do other things.

Which is why, following the likes of Thor and The Avengers, Tom has appeared in movies by Woody Allen, movies based on the works of J.G. Ballard, a bio-pic of the late, great Hank Williams, a little theatre and television adaptations of Shakespeare’s Henry IV Part 1 and 2 and Henry V. He’s even provided voice talents to a couple of documentaries about Charles Darwin and the Galapagos Islands.

And finally, does Tom Hiddleston possess the frivolity of the Aquarius man?

If you’ve ever seen Tom on a talk show, you’ll know he has a very silly streak running through him. Typical Aquarius man. Also, his choice of film roles are not consistently serious. He clearly likes to have fun when he’s making movies. And we’re not just talking about the wild, colourful action of The Avengers, Thor or Kong: Skull Island, Tom has also appeared in Muppets Most Wanted, Family Guy and Robot Chicken.

So, just how much of an Aquarius man is Tom Hiddleston?

We’d score Tom a solid 9/10. It’s only the lack of any real love of socializing that forced us to (very reluctantly) deduct a point.

We’d love to hear what you think. Leave a comment below.

Want to find out if you’re compatible with Tom Hiddleston or any other Aquarius man? Why not take our little compatibility quiz. Click here.

END_OF_DOCUMENT_TOKEN_TO_BE_REPLACED

EBOOKS TO HELP YOU GET YOUR AQUARIUS MAN