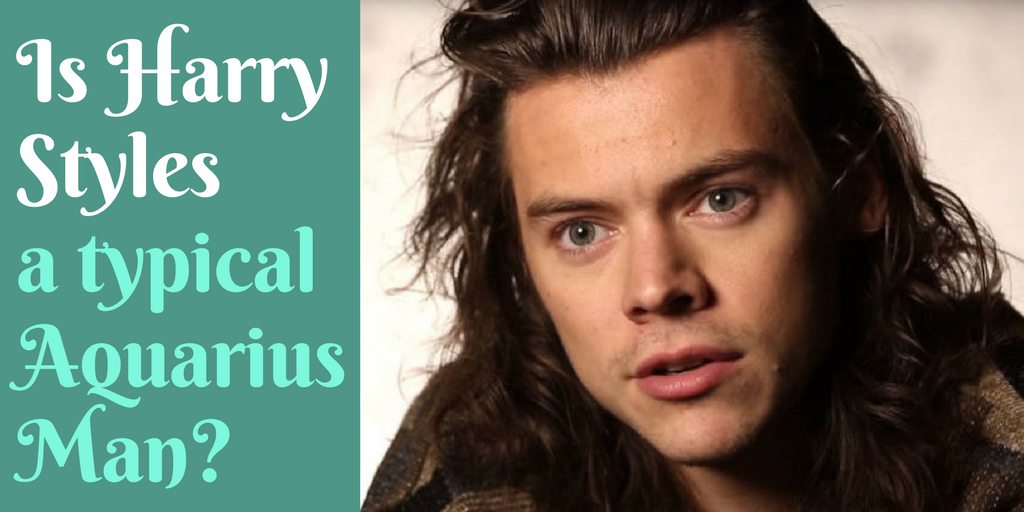 Born on the 1st of February 1994, Harry Styles’ birthday falls fairly central in the Aquarius range, with no danger of pesky cusp forces pulling him towards Pisces or Capricorn. All other things being equal, Harry should be the epitome of Aquarian maleness. But is he?

Facially? Absolutely. Chiseled features are very much the thing with Aquarius men. They tend to have a clearly defined chin and nose creating a distinct and instantly-recognizable profile. Harry is one of those rare celebrities who can be identified even in silhouette.

It’s unsurprising that, with such pleasing features, Harry has won the Teen Choice Award for ‘Best Smile’ not once, but twice. And in 2013 he was ranked 6th in Glamour magazine’s list of the 50 Sexiest Men.

Harry also has the Aquarius man’s physique: slim and toned. I would say, at 5’ 11” he might be considered a little short for a typical Aquarius, but only a little.

Does Harry Styles have the ethics of the Aquarius Man?

This is beyond dispute, given all of Harry’s charity work. Now, don’t get me wrong, almost all celebrities carry out charity work; it’s part of the deal. And, without sounding too cynical, there will doubtless be those who really don’t care and it’s all just one huge and soulless public relations exercise. But Harry doesn’t appear to fall into this category.

In 2016, Harry donated not money but his hair to the Little Princess Trust, a charity that provides real hair to create wigs for children suffering from hair loss, whether due to alopecia or as a result of treatments such as chemotherapy.

Whilst One Direction were on tour in 2015, Harry took time out to visit students from the Lalela Project, an organization that provides arts education to at-risk youth in Cape Town, South Africa.

In fact, the band’s hit cover version of Blondie’s One Way or Another was recorded to support Comic Relief, a British charity that works to tackle poverty and social injustice across the world.

Does Harry Styles have the Social Life of the Typical Aquarius Man?

The Aquarius man is one of the most social of all the signs of the zodiac. They love nothing more than to be surrounded by friends (the more the merrier), skipping from venue to venue, experience to experience.

Obviously, Harry’s social life is limited by his celebrity. There are very few places he can visit without being recognized, mobbed and papped. But Harry manages a surprising amount of socializing for someone in his privileged but difficult position. The evidence is all their, online: Harry leaving The Nice Guy club in Hollywood in the early hours alongside not one, but two female companions; Harrying cosying up to a mysterious female companion in the Collage Nightclub in Sweden; Harry leaving The Box in London, notorious for its risqué cabaret shows; Harry at the Alibi, the Sketch, Mahiki… The list goes on. And on.

But it’s not all cocktails and stumbling out of nightclubs. Here’s Harry himself: “I’m quite old-fashioned. I like going out to dinner. You have the chance to talk to somebody and get to know them better.”

Is Harry ‘Aquarius Social’? The honest answer is: as much as he can be for someone in the public gaze. Imagine what he’d be like if he wasn’t famous. He’d only ever go home for a shower and a change of clothes!

Does Harry Styles Possess the Creativity of the Typical Aquarius Man?

A huge affirmative on this one. Harry isn’t just a pretty face, he’s the songwriting engine behind One Direction (and now his own solo career). What’s more, he’s also written hit songs for other artists, including Michael Bublé and Meghan Trainor, Ariana Grande, Gavin DeGraw, and Alex and Sierra.

And now, he’s embarking on an acting career with a starring role in Christopher Nolan’s World War Two epic, Dunkirk. And while it’s not uncommon for a pop star to make the transition to actor (or vice versa) it’s rare for them to make the leap into such a serious and demanding role. Rom-com? Yes. But a movie of this scale, starring alongside such cinematic heavyweights as Tom Hardy, Kenneth Branagh, Mark Rylance and Cillian Murphy? Not very likely.

Is Harry Styles as Frivolous as the Typical Aquarius Man?

If you’ve ever seen Harry and the One Direction boys on James Corden’s Car Pool Karaoke, you’ll know that he doesn’t take himself very seriously. In fact, most of his television appearances are exercise in silliness.

But don’t take my word for it. Just Google “Harry Styles silly moments” and you’ll be watching and sharing GIFs and YouTube clips for at least the next couple of hours!

How Important is Freedom to Harry Styles?

This is the big one. For any true Aquarius man, freedom is something to be valued above all things. As mentioned above, it’s very difficult – sometimes impossible – for a celebrity, especially one of Harry’s status, to be truly free. That’s why, quite often, their sense of freedom is more easily measured against their creative and lifestyle choices. In other words, the way they exercise their freedom to be themselves.

Harry scores 10 out of 10, here. The easiest thing (or at least the path of least resistance) would have been to continue with One Direction until it exhausted itself. You better believe that’s what the record executives and business managers would have been insisting upon. You never jump off the gravy train or give the golden goose a vacation from laying those pretty, shiny, oh-so-lucrative eggs. Never.

And yet, Harry and the boys did just that. They took a hiatus. The pressure for them to have done anything but that would have been monumental. But they held their ground and did what felt right for them. In the demanding and full-on world of pop celebrity, this is a rare thing indeed and a very Aquarius thing to do. The Aquarius man exercises his freedom to be himself in all things. He will not be railroaded. Ever.

So, just how much of an Aquarius man is Harry Styles?

Without doubt, Harry Styles scores a full 10 out of 10. He is the absolute epitome of Aquarian maleness.

We’d love to hear what you think. Leave a comment below.

Want to find out if you’re compatible with Harry Styles or any other Aquarius man? Why not take our little compatibility quiz. Click here.

Want to find out how to attract an Aquarius man? Click here.

END_OF_DOCUMENT_TOKEN_TO_BE_REPLACED

Born on February 9 1981, Tom Hiddleston was born toward the end of the Aquarius range but not close enough to the beginning of the Pisces range to be considered a cusp personality. So, just how much of an Aquarius man is he? Does Tom Hiddleston look like an Aquarius...